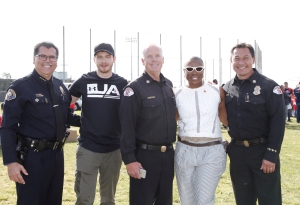 The “sheriff vs police” is a debate that has been hotly contested for many years. The Long Beach Chief of Police, Robert Luna, announced his candidacy in the race for sheriff of Los Angeles County.

Luna has been the Chief of Police for the Long Beach Police Department since 2014. He has been in law enforcement for over 37 years. Long Beach is Los Angeles County’s second-largest city, which comes with a lot of responsibilities. Luna is slated to leave her job later this month.

Luna assures that his law enforcement career isn’t ended just yet, even if he is retiring in this position.

“I still have a lot of energy, and I like what I do….” What better opportunity to put my skills to work for the whole Los Angeles County?”

Luna is by far the most competent and well-known of the field of more than a half-dozen candidates vying against the incumbent, current Sheriff Alex Villanueva.

According to the Long Beach Post, Luna’s department has experienced a decline in both unnecessary use-of-force instances and police shootings throughout his tenure.

Luna has extensive expertise in “the areas of catastrophe and emergency preparation, terrorism, and critical event management,” according to his profile on the Long Beach Police Department website.

Luna has stated that his campaign is focused on building relationships with the community and interacting with people on a more personal level, claiming that his childhood and growing up in poverty in an unincorporated area of Los Angeles as the son of an immigrant Latino family taught him the importance of a public-police relationship.

Luna didn’t hold back when questioned about his main opponent:

“Unfortunately, I feel this sheriff is in charge of a dysfunctional agency….” If you look at the way he communicates – or, maybe more accurately, the lack of communication, the absence of connections – he is having a terrible influence on public safety in this county, and I might almost say beyond.”

The tenure of Villanueva in this post has been marred by controversy. He has clashed with the Los Angeles Board of Supervisors on numerous occasions since becoming the 33rd Sheriff in the county’s history, frequently refusing requests to cooperate on a variety of levels, including investigations and, most recently, refusing to enforce a vaccine mandate on his staff, including many of his deputies.

However, data show that the Long Beach Police Department, led by Luna, has a somewhat higher vaccination rate than the Sheriff’s Department — 57 percent vs 52 percent, respectively.

Many of his deputies have been accused of being involved in “law enforcement gangs,” leading the passage of California Assembly Bill 958, which mandates that all law enforcement organizations establish a policy barring membership in law enforcement gangs. Despite his termination of over 30 deputies for their participation in an off-duty altercation on his first day in office, these charges have surfaced.

According to Attorney General Rob Bonta’s website, a civil rights inquiry of the agency was begun in early 2021 for a number of grounds involving a “pattern or practice of unlawful policing.”

Villanueva has also been accused of engaging in “political stunts,” such as sending his officers to Venice Beach to deal with the homeless issue, which many think is beyond the Sheriff’s Department’s authority.

In addition, he has been embroiled in a legal battle with the widowed wife of late-NBA star Kobe Bryant, which has lasted nearly two years, over the handling of the scene of his fatal accident and how his deputies allegedly released photos to the public despite a promise of confidentiality to the widow.

In response, Villanueva established a department policy prohibiting such behavior, such as photographing accident sites.

In an Instagram Live Story, Villanueva replied to rumours of Luna’s candidacy by saying:

“Actually, I see it as confirmation that the political establishment wants a puppet sheriff and has advertised for as many candidates as possible….” Anyone may run in our nation, and I’m looking forward to the arguments.” 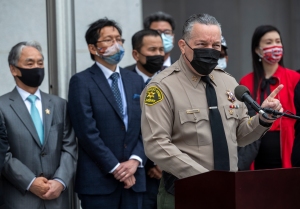 LOS ANGELES, CALIFORNIA – 25 MARCH 2021: During a news conference outside the Hall of Justice in downtown Los Angeles, Los Angeles County Sheriff Alex Villanueva, right, is photographed with members of local Asian community groups in a show of solidarity and support for the local Asian American and Pacific Islander community. In Los Angeles County, Villanueva has advocated for a zero-tolerance policy for hate crimes and occurrences. (Getty Images/Mel Melcon / Los Angeles Times)

Villanueva, who is originally from Chicago, Illinois, has been a member of the Los Angeles County Sheriff’s Department since 1986. His first bid for Sheriff was in 2014, however he was defeated by Jim McDonnell, the Chief of Police of Long Beach at the time.

In 2018, he ran again, this time defeating McDonnell and becoming the first person to accomplish it in the 104-year history of the Los Angeles County Sheriff’s Department. In 138 years, he was also the first democratic candidate to win the seat.

Villanueva has deployed body cameras for deputies, stopped the transfer of unauthorized immigrants to Immigration and Customs Enforcement, and, most recently, secured a $22 million budget surplus in 2021.

Los Angeles Airport Chief of Police Cecil Rhambo, current Sheriff’s deputy Eli Vera – who was demoted from chief to commander almost immediately after declaring his candidacy – and another deputy in lieutenant Eric Strong, among others, are also in the race.

Ekatarina Zharkova, a Costa Mesa woman, was arrested for allegedly stealing over $300,000 in retail items.

The elections aren’t expected to happen until June 2022.